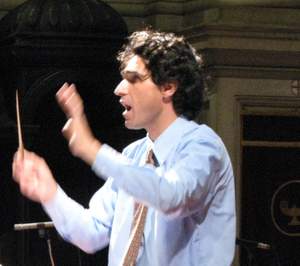 Luca Tessadrelli is a Composer, orchestral conductor and professor.

M° Tessadrelli studied composition at the conservatoire “G. Verdi” of Milan with Azio Corghi and analysis and conducting with Nicola Samale.
He won, in 1991, the first prize at the first edition of the composer's competition “Valentino Caracciolo” in Rome with the Symphonic score “Quattro Postludi” and in 1993, the second prize (with price and credit) at the International arena for composers, sponsored by Unesco, in Paris, with the composition “A Nocturnal upon S. Lucies Day” for 5 female voices, flute, cello and harp.
For three years, he was researcher at the University “Cattolica del Sacro Cuore” of Brescia (Mathematics Department), where he conducted studies aimed to enhance the understanding  of the mental and compositional processes by the use of a computer.
He arranged, in 1995 for the “Editrice La Scuola” the book “Modelli matematici della comunicazione musicale nel pensiero di Giovanni Melzi”
He composed the original soundtracks for the movie “Nostos” by Franco Piavoli.
The center of electronic music "Armando Gentilucci", Milan, commissioned "Variazioni sulla Bellezza" for electronics (1996), performed in the premiere Festival Skinnskatteberg (Sweden) and in many other occasions.
For the Teatro Regio in Parma, the opera season 1997/98, he was responsible for the new instrumentation opera Hansel and Gretel (directed by Lorenzo Arruga).
In 1999, the International Journal of Musicology, Germany, publishes an in-depth analysis of his score "A Nocturnall upon S. Lucies Day" by Marco Bizzarini.
M° Tessadrelli's compositions have been performed in many european countries, Russia, the United States of America and in South America, recorded many times by broadcasting organizations and published by “Casa Musicale Sonzogno” from Milan.
An intense collaboration started from a profitable meeting with the german Latinist Michael Von Albrecht and his daughter Dorothea that inspired the realization of the “Concerto” for Cello and orchestra (2005), “Four Dialogues” for cello solo (2003) and the orchestration and reconstruction of the opera in four acts “Vaterunser” from the russian/german composer George von Albrecht, performed for the first time at Perm's “Diaghilev Opera Ballet Festival” (Russia) in May 2011.
In 2014 he made the critical version of the opera "Pier Luigi Farnese" composed by Constantino Palumbo.
In 2015 he recorded the his "IV sonata (four terachords)" and "10 Metropolitan's Etudes" for piano (pianist Daniel Espen).
Jury member and president in national and international competitions, held several conferences aimed at knowledge of the repertoire and composers of Italian music of the nineteenth and twentieth century.
Tessadrelli is the chair of composition at Parma's Conservatorie “Arrigo Boito” and Senior Coordinator of its Departments.