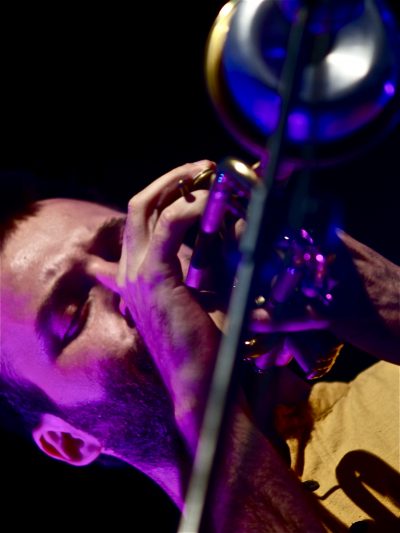 Born on September 22nd 1983 in Castelnovo ne’ Monti (RE), Italy, he starts to study trumpet at the age of 8 at ‘Istituto Musicale Pareggiato Claudio Merulo’ in Castelnovo ne’ Monti. After receiving the Classical Trumpet Degree in 2002 he started the professional career, while studying Engineering at ‘Universita’ degli Studi di Modena e Reggio Emilia’. During these years he wins the Audition for the ‘Youth Orchestra Arturo Toscanini’ in Parma and he plays in several Opera Companies all around Italy, playing in the major Italian theaters.
In summer 2007 he starts to study Jazz at ‘Siena Jazz Clinics’. After attending ‘UmbriaJazz Clinics’ in 2008 he receives a Scholarship for the prestigious Berklee College of Music of Boston (USA).
He moves to Boston in January 2009 and he graduates in 2011 with a Degree
‘Summa cum laude’ in Professional Music. While at Berklee he wins the “Al Natale Brass Scholarship” and “B.A.S Scholarship” for Academic value. He plays in the major bands of the school, like Phil Wilson’s “Rainbow Big Band” and Greg Hopkins’ “Berklee Concert Jazz Orchestra”.
After the Degree in the USA he decides to move back to his country and in 2012 he starts teaching Jazz at the Conservatory ‘Istituto Musicale Pareggiato Claudio Merulo’ in Castelnovo ne’ Monti. In june 2013 he is one of the finalists of the prestigious International Jazz Competition “Premio Internazionale Massimo Urbani”, held in Camerino, Italy.