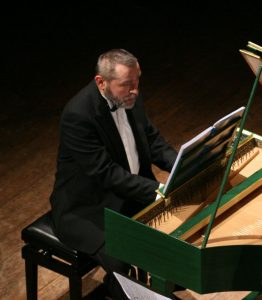 Graduated in piano with the highest honors under the guidance of Franco Scala at the Conservatory of Pesaro, is specialized with some eminent masters (Demus, Sandor, Badura-Skoda, Aldo Ciccolini, etc). Winner of several national piano competitions, he worked as a concert pianist. In '94 he obtained a Diploma in Chamber Music at the Piano Academy of Imola under the guidance of Piernarciso Masi.

Started the study of early keyboard, he majored in harpsichord at the Conservatory of Bologna with AnnaBerta Conti, subsequently perfected for four years on the clavichord, harpsichord and fortepiano at the School of Music in Milan with Emilia Fadini and Jesper Christensen (basso continuo in the Italian music).

Since 1995 He performs on the fortepiano and harpsichord.

Dedicated to the study and implementation of early vocal music, has collaborated with the mezzo-soprano Gloria Banditelli in the production of various Master Classes on Baroque singing.

Accompanist of the operatic repertoire, he has performed with various singers, especially with the soprano Wilma Vernocchi and with the soprano Maria Claudia Bergantin, dedicating it also chamber music repertoire, Lieder and the vocal repertory to contemporary. With this artist has recorded a CD with several chamber songs of the most significant writers of the twentieth century Faenza (Gallignani, Caffarelli, Guerrini).

In the field of early music, working steadily, in a duo with the countertenor Carlo Vistoli on baroque Italian chamber and operatic music.

Since 2010, it has established a permanent collaboration with clarinetist Massimiliano Limonetti, with which he performs music of the eighteenth and nineteenth centuries on original instruments.

Among his numerous recordings, there was a CD for his label Stradivarius (STR 33619), containing 16 sonatas by Domenico Scarlatti on the harpsichord and fortepiano made.

In 2002, on the occasion of the bicentenary of the death of Giuseppe Sarti, has reviewed and edited several Sarti’s scores proposals for the opening of "Nights Malatestiane Summer Festival» in Rimini and "Celebrating Sartiane Festival of Faenza”. For the work done on this occasion, he was awarded the prize "Faenza Music Awards" in 2003, an honor assigned again in 2005. In the summer of 2004 he participated as a speaker at the international conference "Giuseppe Sarti in St. Petersburg, the return” promoted by the Academy Music Foundation of the Hermitage in St. Petersburg Russia.

He is Director of the singing department at the “Giuseppe Sarti” Music School in Faenza (RA). Since 2015 in the same Institute he is a lecturer in the lab of ancient music for keyboard (harpsichord and fortepiano) and at the same time he is piano Professor at the S.M.I.M. Public School of Porto Viro (RO).