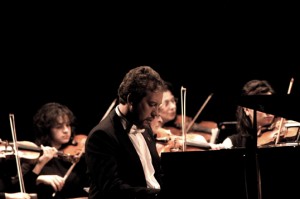 Guido Scano performed solo, in a piano duo, as well as with orchestras and other musicians all throughout Italy (also in the occasion of several music festivals), Slovenia, Egypt, France, Bulgaria, India, Montenegro, Norway, Germany (as a professor and a guest of summer masterclasses in Bavaria), Poland (teacher of specialization courses and member of the jury at International piano competitions), Greece, Lithuania, Portugal (for three consecutive years, in solo concerts and as a jury member), Denmark, Croatia, Andorra, Belarus, Austria, Turkey, Switzerland and Malta.

As an Erasmus teacher, he conducted seminars on the piano technique of Vincenzo Scaramuzza (distinguished pedagogue and creator of a renowed School with students from all around the world) starting in 2008 (Jaen and Murcia, Spain), then in Romania (Cluj Napoca) and Hungary (Szeged). Italian reference for the Concours National de France from 1995 to 2000.

As the President of the Centro Internazionale Ricerche Musicali, he coordinated the programs of the Piccolo Regio theater in Torino from 2001 to 2007, and led conventions on interdisciplinary teaching.

Founder, in 2014, of the Premio Montani, a piano competition for young talents.

Scano studied in Italy (graduated from the Conservatory of Bologna), Switzerland (four-year specialization at the École Internationale de Piano in Lausanne) and Austria (Mozarteum, Salzburg).

Since a young age, he is often a winner of piano and chamber music competitions.

As an attentive promoter of the recent past, Scano released world premieres of some of Lao Silesu's compositions together with his colleagues at the Conservatory of Cuneo, where he taught for over a decade. He is also part of the “Nuova Europa” quintet, characterized by the presence of five musicians from five different European Countries.

After the release of the CD with music and narrations by Erik Satie (as a duo with actor Alessandro Valentini), he immediately releases a new one with part of Busoni's chamber repertoire.

He ultimately transfers to the “Arrigo Boito” Conservatory of Parma in 2015, where he's also made Director of the Department of keyboard instruments.

Part of the team of teachers of the Accademia del Ridotto, in the last years he organized exhibitions with specific musical and actorial repertoires alongside actressed Milena Vukotic, Stefania Sandrelli and Laura Curino.

Aa the author of the book “La Dama Sonora”, all about the figure of the eclectic artist Alberto Savinio, he personally presented its release to the public by performing piano pieces by Savinio in several Italian cities.