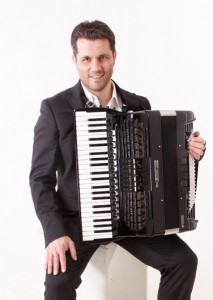 Accordion professor at the Conservatory “Arrigo Boito” in Parma, Giorgio Dellarole studied with Emanuele Spantaconi and Sergio Scappini and specialized in the performance of the early music with Marco Farolfi, Emilia Fadini and Luca Oberti.
Through his concert activity he has brought the accordion to very important concert venues where he has performed all over Italy, in Europe and in China, Africa and United States.
He has recorded as soloist and with chamber ensembles from duo to sextet, performing early music and contemporary and Tango repertoires.
Dellarole has played as a first execution, among others, pieces by Nicola Campogrande and Angelo Gilardino and he often collaborates with musicians such as Michele Andalò, Fiorella Andriani, Luigi Attademo, Bruno Cavallo, Gabriele Geminiani, Lorenzo Micheli, Alessandro Palmeri, Rocco Parisi, Emanuele Segre and Alessandro Tampieri.
In the last years he has devoted himself mainly to the study of the baroque and classical repertoire, being one of the first to bring the accordion to the experts' attention. At the same time, through his courses and master classes, he tries to diffuse the idea of a rigorous philological and stylistic research applied to early music among the accordionists.
Dellarole plays a custom accordion made by Bugari, tuned to the Vallotti temperament at A415 Hz.