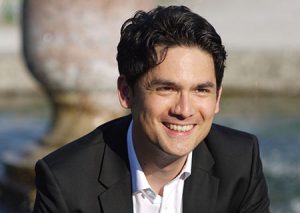 David Schultheiss, born in Ludwigshafen in 1979, received his first violin lessons from Franz Sykora at the music school of his hometown and later studied with Edith Peinemann at the Musikhochschule Frankfurt and Christoph Poppen in Munich.

David Schulteiss was also prize winner in some international competitions such as in Markneukirchen and in Munich (ARD). Since 2009, David Schultheiss has been the first concertmaster of the Bavarian State Orchestra. Before this appointment he played as Konzertmeister with the Essen Chamber Orchestra and with the Kammerorchester Württemberg Heilbronn.

As a soloist, David Schultheiss has performed, among others, with the Staatsphilharmonie Rheinland-Pfalz, the Munich Rundfunkorchester, and several times with the Bavarian State Orchestra under the direction of Kent Nagano. As a first violin of the Amira quartet, he was invited by many important music festivals throughout Europe. David Schultheiss performs also as a chamber musician with distinguished instrumentalists as Hariolf Schlichtig, Alexander Hülshoff, Lisa Batiashvili, François Leleux, Sebastian Manz and the Munich chamber orchestra. Recently, David Schulteiss has performed Dvorak’s Violin Concerto under the direction of Kiril Petrenko.